Marcus Rashford has been forced to grow up quickly. Having outlasted both Zlatan Ibrahimovic and Romelu Lukaku at the club, the twenty one year-old now shoulders the club’s goalscoring responsibility alongside Anthony Martial. This seemingly doesn’t sit well with a vocal percentage of Man Utd fans online and there seems to be a perception that he isn’t a ’20 goal per season striker’, but why would he be? Just look at the best strikers in the Premier League right now: Pierre-Emerick Aubameyang (27), Mohamed Salah (25), Sergio Agüero (23) and Harry Kane (22) were all older than Rashford when they notched their twentieth league goal in a single campaign. Even Manchester United’s all-time top goalscorer Wayne Rooney – with a supply line that boasted the likes of Ryan Giggs and Paul Scholes – didn’t hit twenty until he was 24.

It’s not as though Rashford has been given plenty of opportunities to play at cente forward. When he broke through under Louis van Gaal he had the best part of £75m of attacking talent to contest with in Depay and Martial alongside the club’s all-time top scorer, and Jose Mourinho inevitably opted to bring in his own specialist CFs in Zlatan Ibrahimovic and later Romelu Lukaku. A lot of people view the England international as having played three full seasons as Man Utd’s striker, whereas in reality Transfermarkt have just 57% of his appearances for the club coming centrally. In Ole Gunnar Solskjaer’s current 4-2-3-1 system it looks as though Martial will start nominally at CF with Rashford on the flank, but I’d expect those two to be interchanging fluidly as their understanding develops. This season we’ll see him take up those central areas. Despite never really being given that central role to grow into, Rashford has scored 47 goals in all competitions for Man Utd – only Martial has scored more (50) in that time.

So, if we’re saying that Rashford is at least on the right track in his career, what level is he at now? Below we can see his Understat radar since the start of 18/19 compared with that of Son Heung-Min: 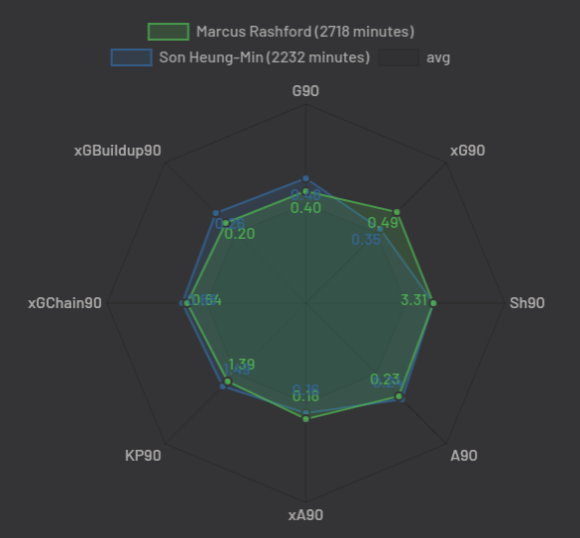 We can see that Son is slightly overperforming with his chances whereas Rashford is slightly underperforming. There is a school of thought that this is concerning as it fundamentally means that Rashford’s finishing is letting his movement and ability to find chances down. However, that underperformance suggests that you can expect to see Rashford’s goal output increase – whereas having a young striker that overperformed their xG would suggest that they’ve been fortunate with their efforts and perhaps won’t be able to maintain their productivity. Son is an interesting comparison as generally seems to be perceived as one of the most underrated forwards in the league – however we can see that his numbers over the course of the last season have been very similar to those of Marcus Rashford in terms of both his own goal output and the creativity he offers his team.

According to Understat, some of the forwards that Rashford profiles most similarly to are Antoine Griezmann, Son Heung-min and Roberto Firmino. Perhaps we need to stop viewing Rashford as an advanced forward who plays on the shoulder and consider that his profile is a bit more interesting than that.

The Roberto Firmino comparison is interesting. Firmino and Rashford both averaged 0.4 goals per 90 in the league last season. However, the common understanding is that Firmino is a much smarter player: he is somebody who comes off the line and creates space for the likes of Salah and Mane, and so his individual goal contribution isn’t a fair reflection of what he offers – and that’s fair enough and is evidenced by the fact that Firmino averaged nearly twice as many passes per game as Rashford (38 to 20) in the Premier League last season. However, the pair had incredibly similar creative numbers (1.3 to 1.2 chances created per game and 6 assists each). Firmino is the better player – but it’s an interesting case study nonetheless.

So, if his output is similar to that of some of the league’s most coveted forward at a younger age, why (other than the fact he hasn’t notched twenty in a season yet) has he come in for so much criticism recently?

Let’s start with his free-kicks, which seem to be a source of much of the frustration. They’re not great. Rashford scored just 1 of the 12 direct free-kick shots he took in the Premier League last season. Free-kicks are low-quality chances though. Sure, it’s frustrating when Man Utd aren’t creating and what is essentially a free shot at goal gets cannoned over the bar – but to expect him to regularly score free-kicks is just unrealistic. His 8% conversion rate was identical to that of Christian Eriksen last season, and only five players scored 2+ with James Maddison (3) being the highest scorer from direct free-kicks in 18/19. It’s a valid argument to suggest that somebody else should be taking free-kicks, but with Andreas Pereira and Juan Mata not always starters, it’s difficult to see who can really offer a noted improvement.

I think there’s a wider issue in his game in regards to shooting from distance. A significant 42% of his shots came from outside the penalty area in the league last season – that needs to drop in the coming seasons. Elite goalscorers like Aubameyang (20%) and Sergio Agüero (25%) tend to shoot from range much less than that. Of course, this will improve as the attacking structure around him improves. Towards the back end of last season, we saw a better variety in the way that Rashford found high-quality chances: those early crosses by Luke Shaw, Pogba through balls and interchanges with Jesse Lingard often lead to Rashford finding opportunities within the box – and this season you can add those 1-2s with Martial on the left flank to that. Whilst things are being tuned around him, though, Rashford needs to keep his head rather than unleashing shots from distance when faced with a low-block – either retaining the ball in the final third and looking to draw out that deep defence or by dribbling at a defender and looking to draw a foul.

The fact that Rashford scored his final league goal of the season in March – when his side were a couple of goals away from securing top four in the final month of the season – certainly didn’t help his reputation. I think it’s important to remember that injury that he picked up and then aggravated vs. Liverpool at home though. To me, Rashford never quite looked fully fit again in 18/20. Before he picked up that injury, he’d averaged a league goal under Ole Gunnar Solskjaer every 111 minutes – he’d be on track to score just under thirty league goals this season if he could maintain that form. Obviously he likely won’t, but it serves to highlight just how well he’s played under the new manager when fully fit.

So, what next? There’s so denying that this is a crucial season for Marcus Rashford. Playing that hybrid LW/CF role in a 4-2-3-1 and having become an almost guaranteed starter in this Manchester United team, it goes without saying that the 21 year-old will be expected to better his league goal tally from last season. His game game record has always been superb, having netted against PSG, Man City, Liverpool, Arsenal, Chelsea, Spurs and Spain in his short career so far. You’d hope that he can start scoring goals from situations that we aren’t used to seeing him score from though: we all know that he’s lethal on the break but if he can start to add goals from tighter spaces in the box against stubborn defences that would be a really encouraging sign.I’d expect him to massively kick on this season, and there’s plenty of evidence within that stats to suggest that he is more than capable of doing so.

Manchester United haven’t had a player score 20+ league goals since Robin van Persie in 2012/13, and no Manchester United academy graduate has ever done so for the club in the Premier League. Let’s hope that Rashford can end that.